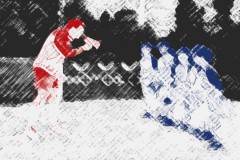 Fun! Since when was a baseball game supposed to be fun? If your players aren’t making 2 million a year, then why do they play? For 4 to 8 year olds, they play completely for fun. For players 10 to 12 years olds, they play for competitive fun, and beyond that, it is mostly for the competition and camaraderie.

Fitness. It is your charge to instill among your players a lifetime appreciation of cardiovascular exercise and fitness. This goes way beyond hard pec’s and pumped calves. It means developing a fit mind, spirit and body. Always include warm-up and conditioning exercises in your practice sessions, and NEVER use running laps, sit-ups, push-ups or any other physical activity as punishment. The player will begin to associate punishment with exercise. And this is bad.

Teamwork. Young players are very egotistical or ‘me’ oriented and have very little awareness of the team or ‘us’. So try to balance your team by equalizing skills, sizes and abilities. Having strong players ‘mentor’ less skilled players can help the less-skilled player greatly, and you never know, you might just have introduced life-long friends! And always discuss skill-development one-on-one with each player, not in front of the other players. This keeps the kids from comparing themselves to each other and fostering even more competition.

Skills. Depending on the age of your team, you will have to modify the information you teach. For instance, force-out can be really tough for some T-Ball players to understand. Be sure to prepare your sessions in advance. Practice and review previously taught skills, then introduce and practice new skills. Encourage other skills in your “Team Talks”, such as communication and decision-making skills.

Diversity. Your team will most likely have good players, OK players and a novice player or two. You’ll have players from high-income families and players from low-income families. You may have White players, Black players, Hispanic players, Indian players, etc…. You’ll have some Catholics, Baptist, Methodists, etc… But it doesn’t matter. It shouldn’t matter. If it does matter to you, you may want to think about your desire to coach. You must treat every kid as an equal, regardless of any of these other factors. And you’ll teach your kids the same, something they may not get from their family life.

Respect. Your leadership and example will instill most of these points. For them to respect themselves, they must feel good about themselves. So, a little praise for minor or major accomplishments goes a long way, and guarantees their respect for you.